The bronze sculpture created by Tomaso Pizio in 1998, entitled ‘The Ballerina’, will be exhibited at the headquarters of the Province of Bergamo, from June 20th to September 19th, 2018.

The sculpure was created to celebrate dance and woman, both strong and elegant, figures constantly at the center of Pizio’s art.

The first one allows the artist to exalt the forms, the movements thank to the solids and voids that are recreated through the sculptural technique, the second one finds here a figurative impetus that reiterates the same emotional fervor typical of the female figure.

The lines are as clean as simple, but they’re also agile and supple, so they give the viewer a deliberately fragile image, but full of meaning and full of movement.

The latter is understood as an extension, in space, of the subject itself, represented at the apex of its own motion, of its own gesture, in a dimension suspended between beginning and end. 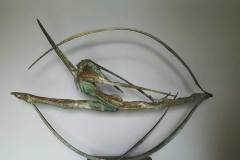