At the end of 1999 Pizio designed and realized the monument dedicated to Pope John XXIII for the village of Sotto il Monte (BG), commissioned by the then Mayor Pietro Esposito and the Association of Friends of Pope John XXIII.
Initially it was located in Piazza della Pace but later it was placed at the entrance to the town hall.
The preparatory sketches clearly indicated the intentions of the artist, very devoted to the figure of the so-called “Good Pope”, to exalt his humanity and sweet personality. The subject showed his face and hands outstretched towards the faithful; the circular lines embracing the monument, about 5 m high, not only moved it, but were the representation of the world that Pope John was able to create around himself, around his personal and humble religiosity, a worldwide network of peace and faith. Pizio, in fact, allowed himself to include in the representation his own desire, that of the Pope’s sanctity, underlined by the hint of a halo created by a dove, flanked by two others and by the cross symbolically placed on the heart, revealing wisdom and unconditional love.
The beauty and purity of this world were resumed by Pizio in the original basement that, with a specular movement, exalted the subject.
The inauguration of the monument took place on June 3, 2000 in the presence of the Minister Patrizia Toia, the Prefect Anna Maria Cancellieri and the then Bishop of Bergamo Mons. Roberto Amedei.

Currently, the Committee created for the valorization and requalification of the monument, is working on cleaning and restoration works, in order to relocate it at the Sanctuary of the Madonnina located in Dezzo di Scalve, in the province of Bergamo.
Individuals and organizations can participate with a free contribution, paying the IBAN code IT70E0538753770000042515538 made out to Parrocchia San Bartolomeo Apostolo – Madonnina – Colere. As causal indicate “ArtBonus for the restoration of the Monument to Pope John XXIII by Tomaso Pizio” so that, making the tax return, you can deduct 65% of the amount paid in 3 annual installments. For more information visit the following page: artbonus .

The inauguration of the monument will take place on Saturday, July 3, 2021. 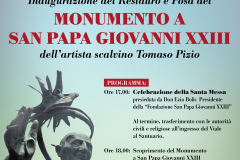 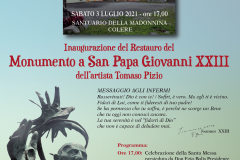 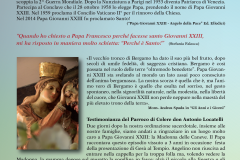 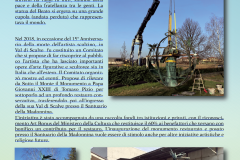 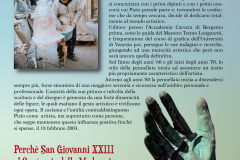 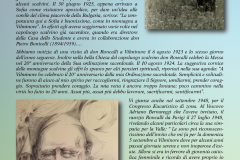 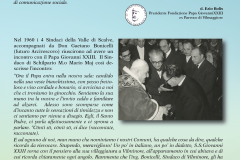 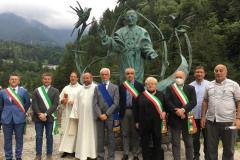 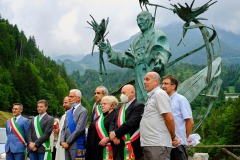 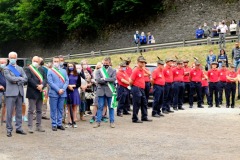 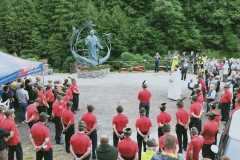 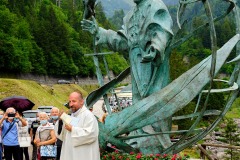 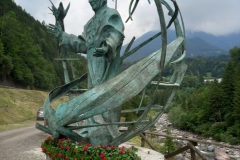